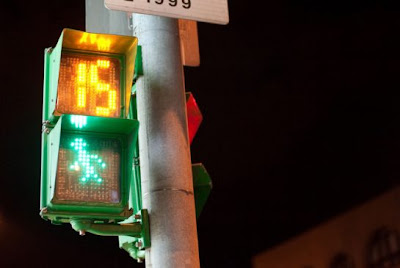 A recent study finds that pedestrian countdown clocks have made intersections safer for pedestrians, but they may have actually increased car accidents across the city in Toronto.
Two doctoral students from University of Toronto observed 1,794 intersections between 2004 and 2008. The first countdown signals were added in November 2006. The researchers found the new pedestrian signals made pedestrians safer, estimating about five fewer collisions between cars and pedestrians per month. But city averaged a total of about 22 more such collisions per month involving intersections with pedestrian countdowns than those that didn’t have them.
The reason lies in driver impatience; drivers may use the countdown clocks to decide whether they can beat a red light, and in fact most drivers are responding by speeding up.

The researchers suggest the impulsive race against the clock could be eliminated by finding a way to make the countdown visible for pedestrians and but hidden from.


For more information on auto insurance, visit us at www.biis.ca or call 1-888-267-4461. Our staff would be pleased to answer all your inquiries.
Feel free to check out our social media sites below: